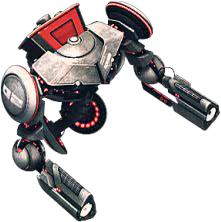 Binary Bot (sometimes shown as 1100101) is rare alien that appears only during a special event, the last known time was during a Winterfest in 2012.

Although it has a high shield with a high shield absorption, it has a very low hitpoints in comparison making it an easy kill once you've picked off its shield. New players should beware of these alien.

The Binary Bot is somewhat like a mothership in the way that rewards are split between everyone who attacked it. The more damage you do, the more rewards you get. If you are going solo against it, you get the full rewards.

The Binary Bot shoots WIZ for rockets in addition to red lasers. If you are a weak player in a small ship, it is strongly recommended that you don't take this one on alone. If you are a stronger player then you should take it down with no problem.

If you are taking the Binary Bot down outside the comfort of your X-2 map, beware of notorious company killers killing you to get the bot, despite the fact that you would still get some of the reward if you did get killed.

WARNING: The Binary bots, "referee Bots" during the 2014 FIFA World Cup require you to use CBC-100. DO NOT waste your time. The costs out weigh the rewards GREATLY.

Binary Bots are easy to solo providing you have a strong ship. You will need:

The Binary bot during carneval and other festive special events.

The Cargo drops vary according to what map the binary bot was destroyed in. 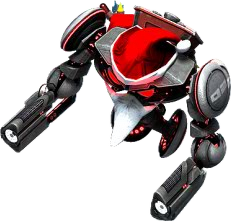 Near Christmas, there is a unique binary bot called Santa 1100101. This binary bot is exactly the same as a regular binary bot with a few key differences. First off it has an evil face on it and it wears a santa hat. It also makes an eerie "ho ho ho" sound. It's shields, hitpoints and damage are roughly the same and it fires WIZ-X rockets like regular binary bots. It often appears at the same time as Ice Meteoroids.