Damage is the effect inflicted by attacking any player or Alien, consisting in the lowering HP/ Shield of the attacked target. The amount of damage that is dealt by a player is determined by the amount of Laser Cannons equipped on a Ship, and any other sort of damage dealing instance such as a the laser battery being used, Rocket Launcher, Rockets, or Mines deployed. 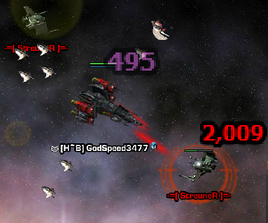 Increasing your damage can be done by multiple ways, those being:

Some steps for increasing the damage are very easy (for example: buying damage boosters, using an damage increasing ship with 5% damage, upgrading 10- 12 levels of lasers, rocket launcher, drones) but some steps are much harder (getting all 10 Havocs for the 10% boost on the drones, upgrading to the max level all the lasers, drones, rocket launcher).